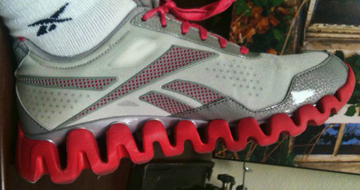 Yes. I wear these in public. (Reebok ZigTechs) And I have two pairs.

Historically, I am not a big fan of exercise. I admire people who do it. And I was pretty good at it back in the day.  Okay, that “day” is sort of a fuzzy dream like when middle-aged men sit around drinking beer and talking about their championship high school football team.

Now, I was not ever an athlete of the catch-a-ball/make-a-goal/win-the-game-at-the-buzzer sort, but I liked to dance,  and was completely caught up in the aerobics fitness era. I even owned Jane Fonda tights and big shirts and leg warmers,  and wore such fashion statements in public, like to the grocery store after class. And I clearly remember “feeling the burn.”

But that was then. We are talking last century.  Jane Fonda is going to be 74 this year.  (Can that be right?)

Indeed, a lot of water has gone under that bridge… and along the way, if cooking had been an Olympic sport, I coulda been a contender. I have never seen a food store I didn’t want to hike through – or a recipe I wouldn’t tackle, no matter how challenging.

But this year, I took up walking.  Okay. Yes. Walking. I know it’s not exactly an extreme sport.  One foot in front of the other. Left right left right. I started on January 2 with a new free app for my iPhone called Runkeeper.  My sister-in-law, Karen, told me about it on New Year’s Day. Not one to rush into things without forethought, I waited until Sunday to jump in with both feet.One at a time. I dug around and found my walking shoes. And two good cushy ankle socks that matched. And dug up the headphones that came with my iPhone.  And made a mix-tape (they call them playlists now) for walking.

I have learned a lot about walking in these first few months. It’s a lot more than just getting there. It is decadent, self-indulgent, me time, free for the taking. No sign-up fee, no monthly charges. Just step by step. Breathing deep cleansing outside unfiltered air.  Getting tired and a little out of breath. It’s good for the soul.

My first goal was 60 miles in 2011. Lofty? No. But if nothing, I know my limits and weaknesses – and lack of staying power when it comes to something that makes me sweat. But I did it that day, and the next, and the next. One mile, and then a little further, and a little more.

We have a good walking neighborhood. Not much traffic.  Friendly waves from neighbors I know and  even folks I don’t.  A few hills and lots to see and hear and smell. Streets I have driven for years with the windows rolled up, in climate controlled comfort. It’s funny how my senses have become more aware of all that is out there.

And today -a little more than  midway through March, I have walked more than 125 miles.  And it has become kind of addictive.  Early on, I decided to try to walk  seven miles a week — and passed my 60 mile mark sometime in mid-February. I found that some weeks seven miles turns into 10 or 12.   I am averaging 45 miles a month.

I have walked in freezing weather and  blustery wind, but I draw the line at precipitation. I have not walked in scorching heat yet. I usually walk in the afternoons, but I like the crisp cool mornings that weekends allow.

The music is good. I have literally thousands of songs on my iTunes account – some I have downloaded and some I have uploaded from cds.  While I have background music playing pretty constantly through my life at work and in my home office, and in my car, and in the kitchen, lately,  I had not had time to really listen.

But, wow! Walking is a great listening room.  No one talks over the music. No one walks in  and asks for something during the chorus, or calls in the middle of a great instrumental lead.  I  can listen to Walt Wilkins and Tony Bennett and ABBA and Israel Kamakawiwo’ole and Loretta Lynn and no one questions my format. And I can play a favorite over and over and over – and even sing along, because no one really listens to someone walking down the street.

I like walking with friends. Melissa has walked with me a lot. Mary Mikel and I catch up when our schedules allow. It’s a great way to visit, vent and laugh, albeit sometimes we do get a little out of breath on a steep grade.

But most of those miles have been solitary. That is when it is  completely, selfishly, totally my time. To think, listen, wonder, dream, and yes, even pray. There is much to be thankful for when you give yourself time to just be. Uninterrupted time with nothing required beyond putting one foot in front of the other allows mercy and grace some breathing room.

There is much to learn about our neighborhood. I have figured out who burns real wood and who warms the hearth with gas logs on cold days. I know who gets up early to mow their grass on Saturday mornings, and who has fresh fertilizer waiting to be spread.  Who rakes their leaves and who leaves them for the next strong wind. And who puts their garbage can out the day before, and who recycles. I know who grills on propane and who uses charcoal or mesquite or live oak  to cook their  weekend supper.   And the hoarder in me has fought the temptation to poke through the boxes of stuff at the curb when a trendy upscale neighbor moved to Dallas.

Along the way,  I got some trendy new Reebok ZigTech shoes. My friend, Bob Pankey,  is a gait expert and he told me to get my walking shoes a size larger than my normal shoes.  No kidding. But I did. They looked sort of like clown shoes at first. But he was right, and they are perfect. No shin aches or blisters or knee pain.  I learned to tie them like a marathon runner so the heel is tight and doesn’t slip.

And so it goes. 125 miles. Next goal, 200 miles by summer. Along the way, I have shed a few pounds, but more importantly, I have gained some personal space and quality time  that I didn’t even know was missing.

Try it. And if you have a smart phone, get one of those apps that tracks your distance. I like the accountability – and how the steps add up to miles.

Take a walk. To the mailbox or the street corner or around the block.  Make some quality time for yourself. When was the last time you did that?

Listening to: Walt Wilkins – “The Shape I’m In”