Do you remember the first record you ever owned? Mine was the Beatles’ “A Hard Day’s Night” and Santa brought it with my portable record player the Christmas I was six.

We had a stereo console in the living room. It was a big piece of furniture, encased in a maple finished cabinet and had two sliding doors in the top and  gold flecked speaker upholstery. My mother had a good collection of albums: Roger Miller, Nat King Cole, Andy Williams,  The Ray Conniff Singers, Vikki Carr, Perry Como, Ray Price,  and soundtrack albums of every musical Rodgers and Hammerstein ever wrote.

Almost too sophisticated for 45s, that grand old machine did have one of those adapters the size of a toilet paper roll that you could lock in and load with a stack of records, so they would drop and play automatically. You could stack LPs too, in case you were too lazy  to get up and change records every 18 minutes. And of course, it had the tuner and played AM and FM, but we didn’t discover FM until KRMH (Karma) came along a decade later.

The stereo was in the living room, and the television set in the den, so I could listen anytime I wanted –  as long as I didn’t put my feet on the furniture or make a mess.  My cousins were members of a mail order record club, and owned two records I wished were mine.  One was Gene Pitney’s  The Man Who Shot Liberty Valence. The other was Leslie Gore’s It’s My Party. Odd that those albums stand out in this random stream of consciousness. My cousin thought Gene Pitney was dreamy. And I liked the revenge of  “Judy’s Turn to Cry.”

My mom bought some good stuff, too.  I liked Nancy Sinatra the best. The coolest record albums we owned when I was a kid were Nancy Sinatra’s Boots and Country My Way.  I wrote down the lyrics and learned every song on both records.  I was about ten the year I got some light blue jeans  and a striped shirt  almost exactly like she wore on the cover of CMW. And I bought my own single of “Something Stupid.”  Good stuff, that.

We had one store in town that sold vinyl. B&O Music also sold cork wax and Black Diamond strings and bongos, and maybe short wave radio equipment.  Before long, I owned the Monkees and Herman’s Hermits, Paul Revere,  and a stack of other pop hits. I got my music advice from Tiger Beat and Sixteen magazines so I didn’t jump right into being cool. I pretty much started at the shallow end of the cool pool.

Summer camps led to my discovery of folk music.  We called them camp songs. Peter Paul & Mary and Pete Seeger,  Woody Guthrie and The Kingston Trio taught us songs that made us feel nostalgic at the ripe old age of twelve.

Junior high dances added to our social consciousness.”Billy, Don’t Be a Hero” and “Ruby, Don’t Take Your Love To Town” found their ways onto the playlists of our lives.  We wondered aloud what Billy Joe McAllister threw off the Tallahassee Bridge.

As soon as someone was old enough to drive and anyone had a couple of dollars for gas money, we’d pile in and head for the nearest dance hall to shuffle the night away to country classics. We waltzed across Central Texas, and two-stepped through the hill country. My high school summers were a blur of steel guitars and fiddles.  Dance halls with names like Club 21, the Rockin’ M,  Crystal Chandelier, Ramblin’ Rose and Texan Palace featured cover bands like The Velvets, The Moods, and the Country Nu-Notes. Once in a while, Hank Thompson or Ernest Tubb would travel through on a big old, diesel-belching tour bus and play the Watermelon Thump or Camp Ben McCulloch Reunion,  and we’d hear the real thing – the stuff you heard on  jukeboxes. 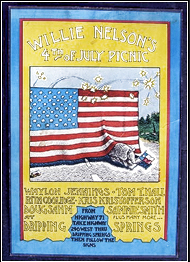 Then came the summer of ’73. The summer before my junior year in high school. We said “We’re going to a picnic and a dance at a ranch over by Drippin’ Springs.”  And our mothers said, “Okay, be careful.”

Willie Nelson put Hays County on the map with that first 4th of July picnic and set the course of my musical taste forever. It was our own Texas version of Woodstock: Kris and Rita, Waylon, Billy Joe Shaver,  Tom T. Hall… and Willie sitting in and singing with all of them.

Today, almost 40 years later, I can still feel the kick of the bass in my chest in the hot Texas sun.

Those great American poets left a mark on my soul.  And I still remember all the words.